We are very excited for this year’s Networking Reception sponsored by SoftPro. Join fellow attendees for an evening of networking and a live interview and Q&A with HGTV’s Tarek El Moussa!

If you were wondering how he got started, the challenges he faces in the current market and what makes him tick you’ll want to tune in. You’ve seen HGTV’s biggest star on your TV screen now see him up close and personal. This is the interview you won’t want to miss. 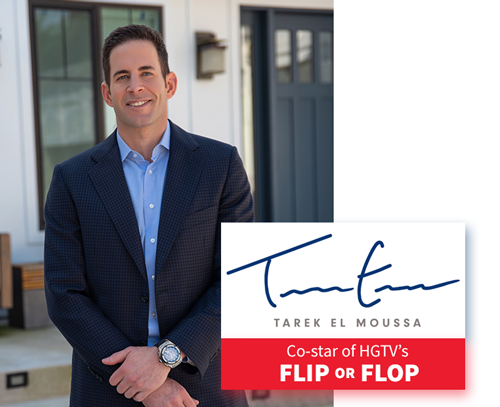 Tarek El Moussa is the co-star of the hit HGTV show Flip or Flop, currently in its eighth season with over 21.9 million viewers and ranked #1 cable show in its time slot and has been renewed for a ninth season. In addition to successfully flipping more than 500 properties over the years, Tarek is a successful Entrepreneur, Real Estate Expert and Investor with a portfolio of over 100 properties, a wholesale real estate company and a production company.

Born into an immigrant family in Buena Park, California, Tarek’s hard-driving father taught him the value of hard work, the importance of a healthy competitive spirit and how to push himself to higher limits. At the age of 20, Tarek dropped out of college to enroll in Real Estate School. At 21, he received his real estate license and quickly made a name for himself in Orange County, California, becoming the top agent in his company. By 22, he bought his first million-dollar home.

At the height of the housing boom, he was selling multi-million-dollar mansions like hotcakes but when the housing bubble burst, Tarek went broke and was forced to move into his parent’s garage. In the time period between sleeping next to the family station wagon and cans of paint, Tarek devised a plan to rebuild his wealth.  He then carved out a new niche for himself in the world of real estate: flipping distressed properties. Through his drive and the generosity of friends, family and business mentors, Tarek landed back on his feet and became a multi-millionaire.

Since then, Tarek has purchased and flipped hundreds of properties.  In 2012, he sold the idea of a house flipping show to HGTV with a guarantee of ten episodes. Eight years later, he has over 141 episodes under his belt, and counting, with his biggest on-air profit of over $340,000.  The show continuously holds a top spot on HGTV, with over 22 Million viewers and a recent episode ranking as the #1 cable show in its timeslot among viewers P25-54. His show has inspired the Flip or Flop franchise in Nashville, Chicago, Atlanta, Las Vegas and Fort Worth. Tarek owns his own production company in which he is the Executive Producer of Chi-Town Flip.

The Networking Reception is
included with your
NS3 Registration